produces over two million seedlings every year and is the oldest federal seedling nursery in the nation.

The area’s sandy loam, acidic to neutral soil, along with plentiful water means the Bessey Nursery is a perfect location for a federal seedling nursery. The seedlings grown here are used for reforestation following fire and insect infestations, wildlife/habitat plantings, wind breaks, conservation plantings, as well as for general planting. It is also home of the seed bank for forests in the Rocky Mountain Region. Cone collected from the Forest Service districts are sent to the Nursery to extract the seed and store until needed. 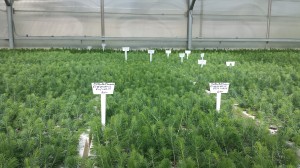 During the Spring and Fall, the Nursery is in full production; growing, packing and shipping hundreds of thousands of seedlings to the Forest Service, Bureau of Land Management, conservation districts, and other government agencies.

“This Spring we shipped 150,000 container seedlings of Douglas-Fir and Ponderosa Pine to the site of the Hayman fire in Pike San Isabel National Forest in Colorado,” says Richard Gilbert, Bessey Nursery Manager. “These seedlings were grown from cones gathered by Pike San Isabel National Forest Service personnel near Colorado Springs and sent to us for extraction and storage until they are needed. The seedlings were started in February 2013, packed once dormant in November 2013, stored in a freezer at 26 degrees, and today we are ready to return them home. It’s gratifying to know we play a part in preserving the natural integrity of our nation’s forests.”